On Wednesday 7th October 2020 the Department of Antiquities, in collaboration with the Larnaka Sewerage and Drainage Board, organized an information day for the public entitled “The archaeological finds uncovered during the construction works of the Larnaka Sewerage and Drainage Board”. Speakers at the event were the Curator of Antiquities Dr. Giorgos Georghiou, Conservator of Antiquities Dr. Eleutherios Charalambous and Archaeological Officer Ms. Polina Christofi.

The rescue archaeological excavations conducted during the construction works.

The excavations conducted for the Larnaka Sewerage and Drainage Board (LSDB) are considered an extremely invasive process in archaeological research. Nevertheless, they have proved to be a source of new and important archaeological information. The trenches created by the LSDB have proved to be for the archaeologists a vertical stratigraphic section, in some cases up to 4 meters deep, in the area of ancient Kition and its necropoleis and the Medieval/ Ottoman settlement of Larnaka. Τhese vertical sections, have revealed architectural remains, such as walls/ buildings, as well as tombs, large numbers of artefacts including pottery, coins and figurines. The comprehensive study of all data can help detect the boundaries and the distribution of the residential, the secular and the burial sites throughout the ages from Larnaka’s initial settlement to the present day. It can also help to indicate the dynamic relationship between the inhabitants of different periods with their surroundings and their ancestors.

Due to the limited archaeological visibility, because of the long and narrow trenches of LSDB, the residential strata and the architectural monuments provides only a small glimpse of the wealth of the city’s history spanning more than 17 centuries. The burial monuments narrate with details the city’s importance. The vast necropolis, whose span now is beginning to be fully understood because of the LSDB’s works, occupies the areas north and west of the city’s wall for several kilometers more than previously identified.

LSDB’s contract S9 provided archaeological research with the most important information about the necropolises of the city-kingdom of Kition. It was the first time that archaeologists had the opportunity to excavate the streets south of Leoforos Timayia avenue. This has helped to clarify questions about the city’s topography and its relation to its coastline. It seems that in the vicinity, a necropolis was formed as early as the 12th century BCE, while at its borders, was the bay of the Iron Age coastline. The tombs of the period are impressive.

During the Roman period on the periphery of the same necropolises, burial monuments have been excavated that were founded, used and abandoned during the same period. These are characterized by architectural types typical of the period, but also by practices that deviated from the common practices of earlier periods. Specifically, during the construction works for the contracts C12/C12A and S9, chamber tombs of rectangular plan which contained inside a platform for the deposition of the dead have been excavated.

Additionally a slightly different architectural type which includes loculi that are niches and their opening is led from the central chamber and is intended for a primary internment was also revealed. In conjunction, additional, unique burial monuments have been studied that were solely used for secondary internments.

The knowledge gap for the historical continuity of Larnaka during the Medieval period, because of LSDB’s works, has started to close. Terra Santa and St Francis of Assize Streets have brought to light one of the most important archaeological sites of the city and of Cyprus. The remains of the 16th century monastery and the hostel for pilgrims of the Franciscan monks have been brought to light. The ruins were found in conjunction with the 19th century church of Madonna delle Grazie (Terra Santa). In written sources from 1546 there are accounts for the existence of the hostel and they describe with vivid colors the life of the monks and the use of the hostel for pilgrims on their way to the Holy Lands. The foundations of small adjoined rooms were uncovered, divided on a single wall running across the south- north axis with a parallel horizontal narrow corridor on the western part of the building and other vertical corridors to secure private access. The extent and the size of the monument point to its significance due to the expenditure in money and sources for its construction. All movable finds date from the late 15th century to the 20th. The large amounts of sherds from imported majolica wares should be highlighted. The existence of this type of pottery implies the wealth of the monastery and the strong bonds with continental Europe. It also provides researchers with the opportunity to compare the imported wares with the local production and thus derive more accurate results when dating the local sgraffito wares of the 16th– 17th centuries.

During the excavation of contract C12, in the heart of the modern city of Larnaka, architectural remains and a mosaic floor were revealed. The excavation and the revelation of the mosaic floor had gradually begun in May 2016 with an initial aim to locate the limits of the floor and conclude whether the construction works could continue. It started out as a rescue excavation. During the first season, part of a mosaic floor was unearthed with excavated dimensions of 22 X 6.60 meters. It constitutes part of a bath complex. The section of the mosaic that has not been revealed, consists mainly of a geometric motif decoration, surrounding the central paintings which present the mythology of the Labours of Hercules. It is the first time that this decorative motif has been found in mosaic floors in Cyprus. The mosaic’s good preservation allows for a deep understanding of its iconography, which is a rare theme for the Roman period.

The first five paintings from south to north are very fragmentary due to modern intervention/destruction. The rest of the paintings represent the Labours in the following order: the belt of Hippolyta, the Nemean Lion, the cattle of Geryon, the Cretan bull, Cerberus and the golden apples of the Hesperides.

In reference to the examination and study of the pottery found, as a preliminary note, there are two distinct chronological groups, one that dates to the 3rd– 4th centuries AD and another that dates to the 5th– early 7th centuries AD. The main vessel types found of the 5th– 7th strata are for storage (amphoras) and cooking pots. While, in the Roman strata there is a strong presence of table wares, especially jugs. The presence of vast numbers of storage/ transportation vessels and the evidence of burning found in an adjacent area, indicate that the site after the 5th century AD was not used as a bath complex. However this is still a working hypothesis since this observation cannot be confirmed by the architectural remains.

The enhancement of this mosaic is a basic priority for the Department of Antiquities which is always in accordance with its policy for the preservation, study and promotion of our archaeological heritage. The decisions towards achieving this goal, are taken based on the evaluation of all data and after a scientific assessment is carried out concerning all the parameters especially any risks of future damage. The final decision for the promotion of the mosaic and the monument will be taken once the excavation is completed and after a multidisciplinary team is established which will evaluate the potential mechanisms of deterioration and will discuss all the possible solutions as to the promotion and  to highlight this important archaeological find.

The city of Larnaka has emerged and evolved through its rich long history, proving to be for archaeologists a unique treasure of evidence and information. The goal of the Department of Antiquities is to ensure that the modern development of the city can coexist with its opulent past and that the construction of projects of social importance such as the sewage network, despite the short-term cost for the inhabitants, will have long-term and beneficial results. A multitude of new evidence and artefacts which will soon come to light will add complete the archaeological image of the city’s past that we have begun to formulate. 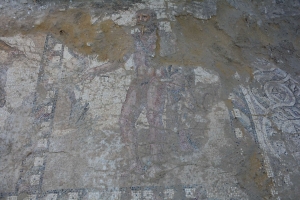 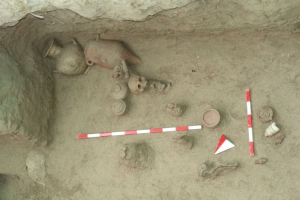 Scroll to top
We use cookies on our website to give you the most relevant experience by remembering your preferences and repeat visits. By clicking “Accept All”, you consent to the use of ALL the cookies. However, you may visit "Cookie Settings" to provide a controlled consent.

This website uses cookies to improve your experience while you navigate through the website. Out of these, the cookies that are categorized as necessary are stored on your browser as they are essential for the working of basic functionalities of the website. We also use third-party cookies that help us analyze and understand how you use this website. These cookies will be stored in your browser only with your consent. You also have the option to opt-out of these cookies. But opting out of some of these cookies may affect your browsing experience.
Necessary Always Enabled
Necessary cookies are absolutely essential for the website to function properly. These cookies ensure basic functionalities and security features of the website, anonymously.
Functional
Functional cookies help to perform certain functionalities like sharing the content of the website on social media platforms, collect feedbacks, and other third-party features.
Performance
Performance cookies are used to understand and analyze the key performance indexes of the website which helps in delivering a better user experience for the visitors.
Analytics
Analytical cookies are used to understand how visitors interact with the website. These cookies help provide information on metrics the number of visitors, bounce rate, traffic source, etc.
Others
Other uncategorized cookies are those that are being analyzed and have not been classified into a category as yet.
Advertisement
Advertisement cookies are used to provide visitors with relevant ads and marketing campaigns. These cookies track visitors across websites and collect information to provide customized ads.
SAVE & ACCEPT